With howling winds blowing along the east coast, local news is somewhat quiet this week. Thankfully Shane Osta stepped up with a top report on his tropical expedition:

Hi Andrew, as promised I am forwarding a couple of photos from our Samoa trip that we just returned from. We spent four hours in the morning and four in the afternoon aboard this boat, fishing offshore from Savaii. In three days we had bagged 31 fish. The species ranged from yellowfin tuna, wahoo, GT's, Spanish macks, through to skipjacks and dogtooth tuna. In all 11 different species. Lost a Sail Fish!!!!! 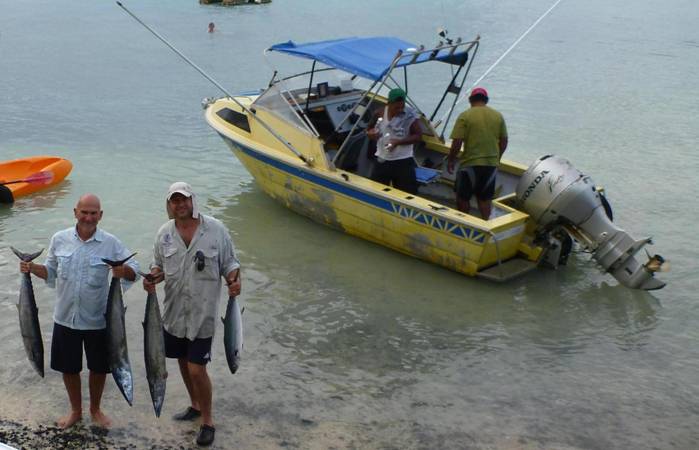 We took a lot of our own gear. I brought over a Shimano three piece blue water travel rod and mated it to your Tokushima HK 7500 reel.

Never missed a beat. It handled this barracuda and the yellowfin with ease. 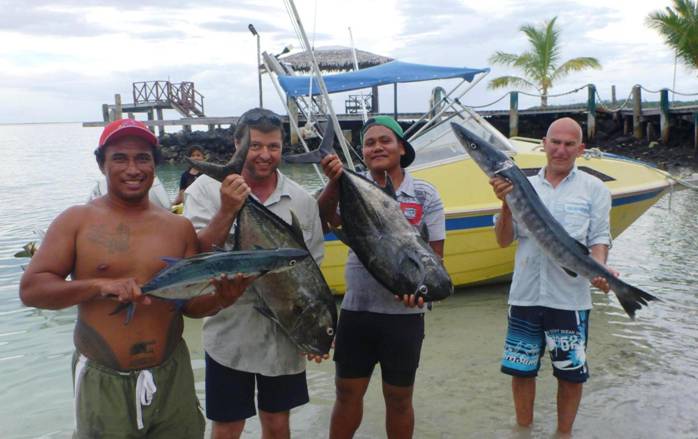 The trip was organised through a company called Fishing Getaways. They were excellent operators. We stayed in a resort called Vai I Moana. The owner and all of the staff could not have been more friendly and accommodating. The boat Captain Kere was a great operator. He would have stayed out until we ran out of fuel to ensure that we were satisfied.

Well that’s a good recommendation. Shane, I take my hat off to you! Your energy levels are amazing.  Damien from Gove phoned on Wednesday to order Head Starts, and told me the lures are all the rage up there. He needs them ASAP, because the local sailfish comp starts next week: 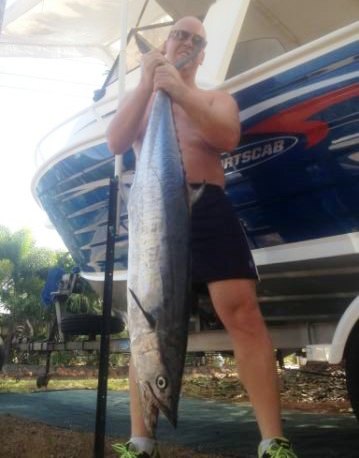 There ya go bud, if I catch a donkey like this with em I’ll let you know! Cheers, Damo

Please do, Damien! They’re deadly on mackerel and sails: 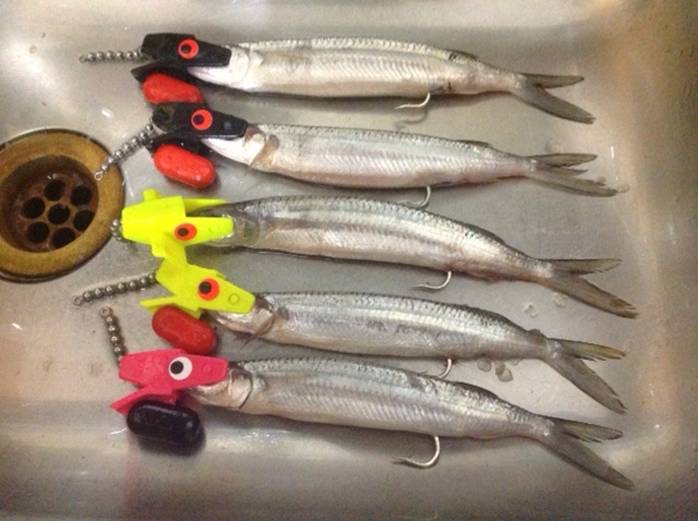 Richard Bradford’s a long time fisho but new, to chasing kingfish. We sent him and his crew a stack of gear and he generously wrote back with a review: 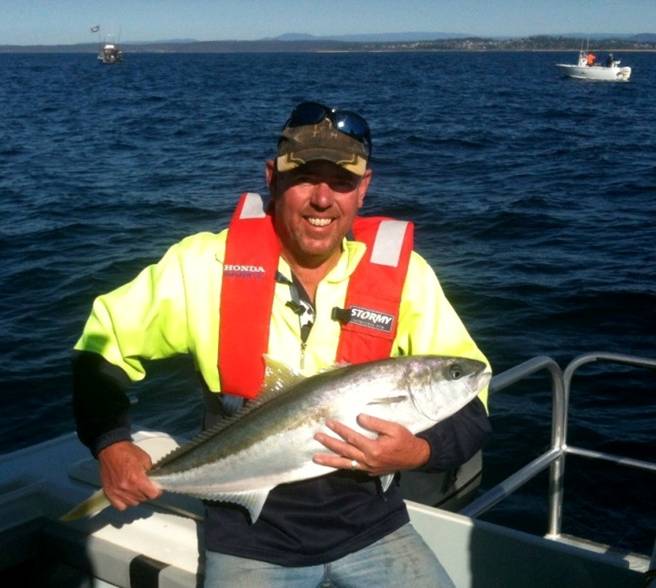 these were just a couple of 15 Kingies we caught on our first day out Kingie fishing with your 3 Daiwa 5000T and Hercules Jig combos that we purchased. The rods and reels performed great along with the jigs. We had an absolute blast with the Kingies and could not believe why we have not done this before. For the last 15 years or so we have been going out wide chasing Marlin and Tuna which is a great fishing but now we have got another form of sports fishing we can do in close and will be doing a lot more of. 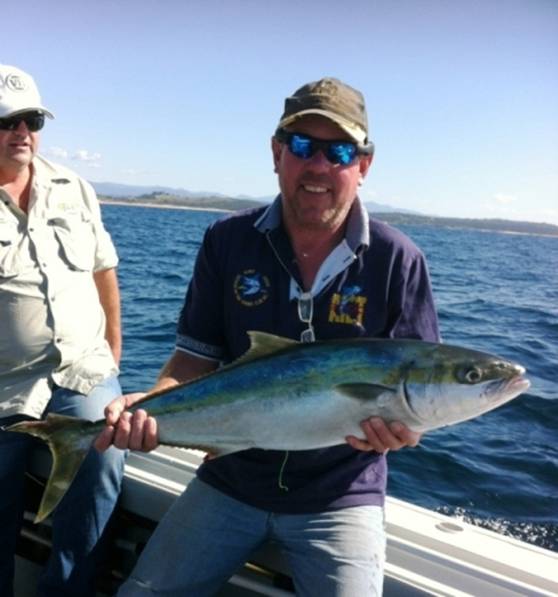 Mate you’ve made my day, with that upbeat feedback. We joke that sometimes the report is all kingfish all the time, but what else can match them for the combination of fighting ability, eating quality, and most importantly, availability? Happy fishos hooking up, that’s what it’s all about. Dave Uren: 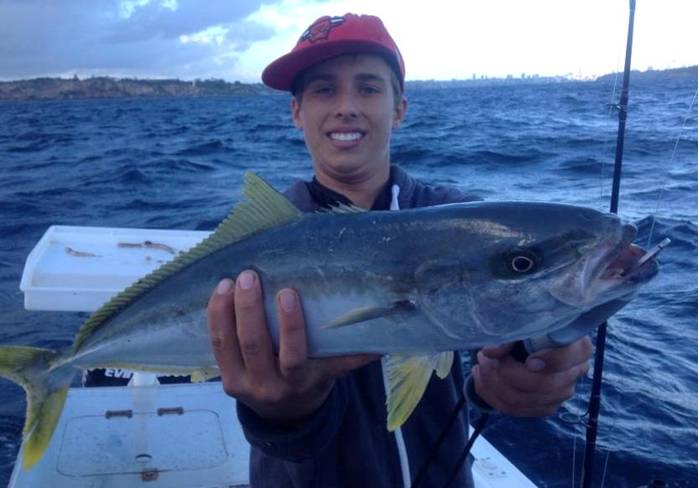 This one was off Old Mans Hat, downrigged a live yakka. Thanks Andy for all of your kingfish downrigging techiques. I’m getting a few now cheers Dave

Great! We’re going to have a huge summer hunting them, Dave. John K writes in with a timely suggestion:

Hi Andy, I was thinking it be a good idea for you to host a down rigger shop social day. It could be a fishing outing or even just a picnic or a get together at a local club.

Well mate I have spent today out at the Tinnie & Tackle Show at Eastern Creek, along with Spiro and Carolyn. Lots of laughs and plenty of clients and friends stopping by. We had a tiring but great day: 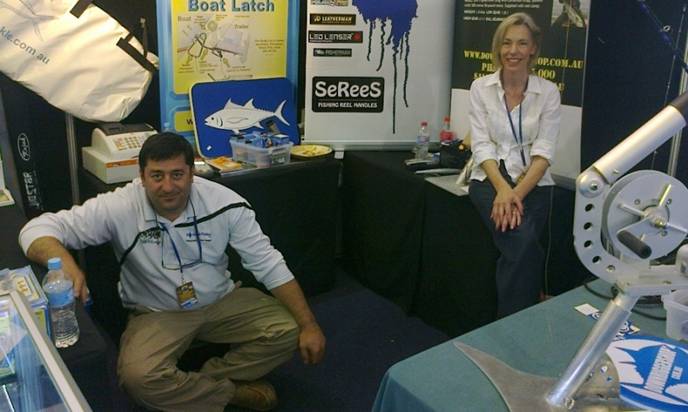 Out there tomorrow (Sunday) too, and heading down to Eden early next month. fishing Brogo dam and Mowarry Point, and looking forward to the trip like you wouldn't believe. Anyone down that way very welcome to join us at the game fishing club, on Saturday 9th: 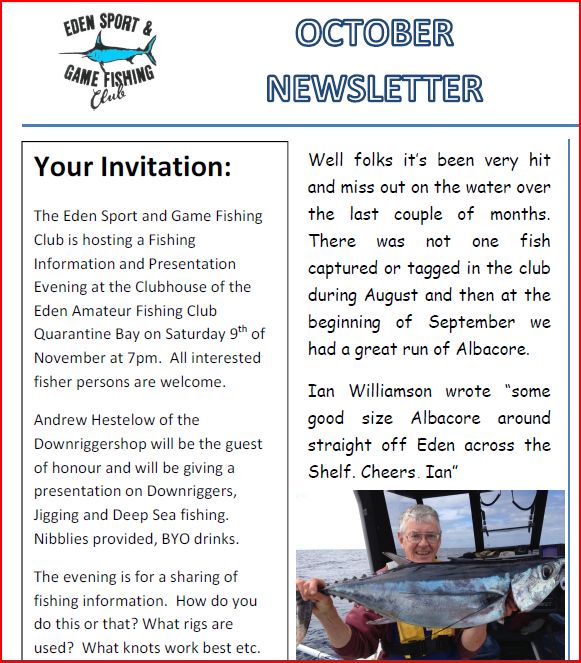 I’m always available to talk on downrigging, jigging and deep water fishing anywhere, anytime. So if you’d like me to stop by your club meeting one night, just send an email? To boats, and here's the collapsible rocket launcher/bimini on John K's Fisherman 480 - in the upright position: 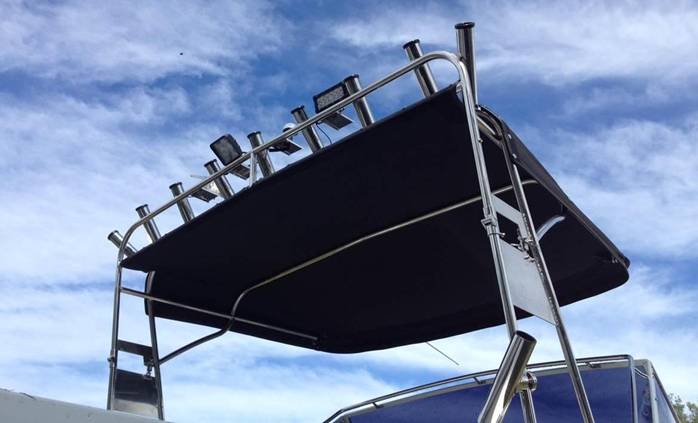 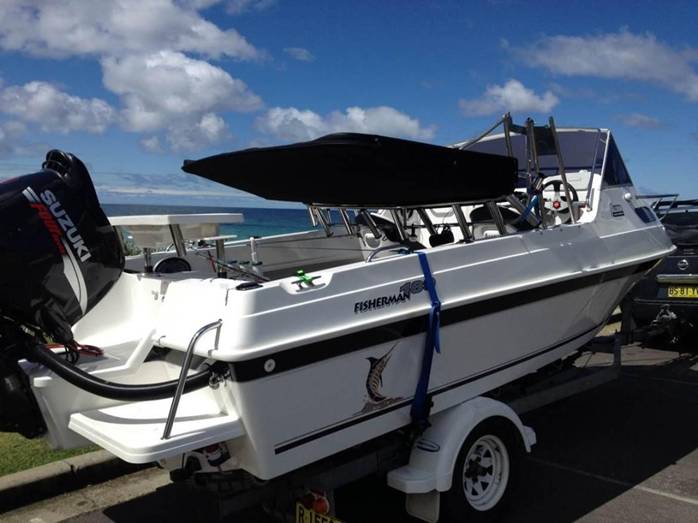 This is a dang good idea, not just for trailering, but for anywhere there's height restriction issues. Dave writes:

By way of thanks to all the contributors to your newsletter that make it such an anticipated arrival each week, I’d like to offer a 10% discount on ANY products to all customers who mention your newsletter in their enquiry.

He he. Gee you blokes know how to get on my good side. J Talking about size, this 30 foot twin hull launched at Roseville on Tuesday. Needs flags for towing, very big rig: 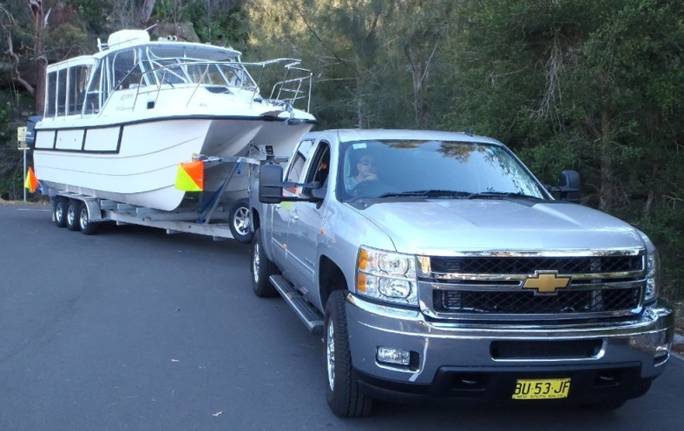 Boats. Cars. Trailers. All needing their own rego, servicing, parking, and insurance. Matt Cassar's got an idea. Combine all three: 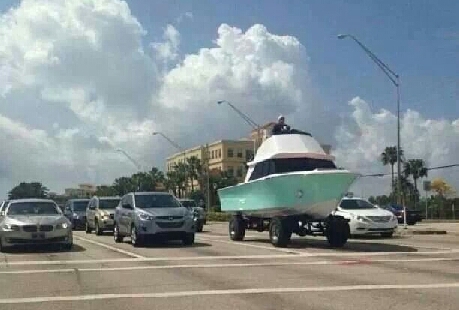 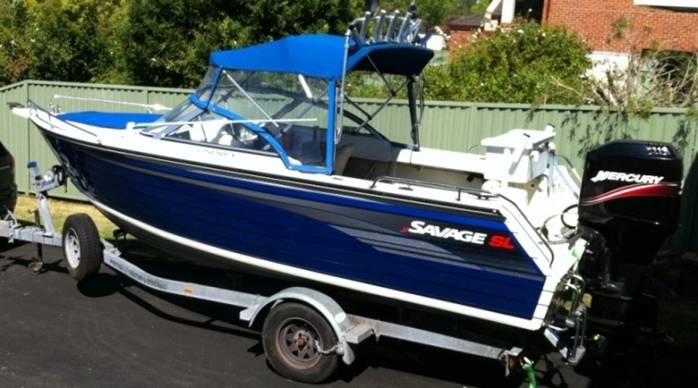 No problem Tim, more than happy to help out clients and friends this way. And that definitely includes Ross, AKA Black Pearl: 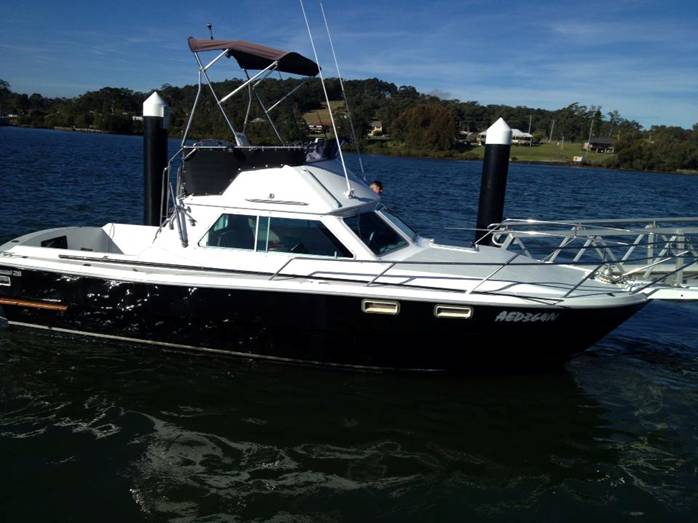 Randell 26 brand new turbo diesel. Boats just been fully restored. Too much to list, comes with a slip trailer.

Will take 60k or swap for big trailer boat.

This is a top boat lads, up at Port, ready to go this coming season. Glen Cadoo’s boat not for sale, but what a beauty it is: 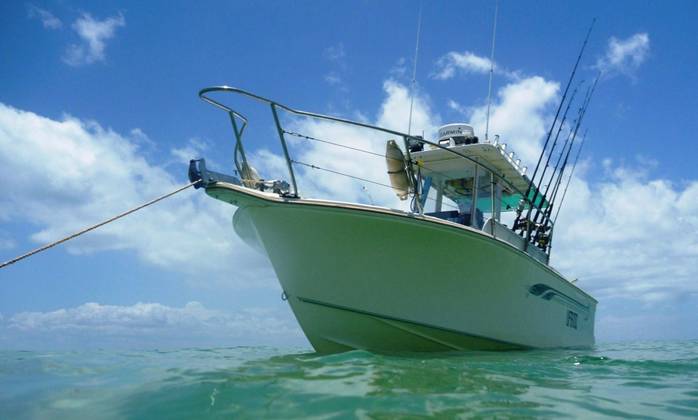 Hi Andy, pickies of the little girl as requested. And they say size don't matter. 250 hp 4 stroke Suzuki. 70 km radar. 400 lts fuel. And a bloody nice bloke behind the wheel. Threw in a bonus shot of the inside just to rub in a bit of salt,

Remember I have saved that spot in there for you, thanks Glen 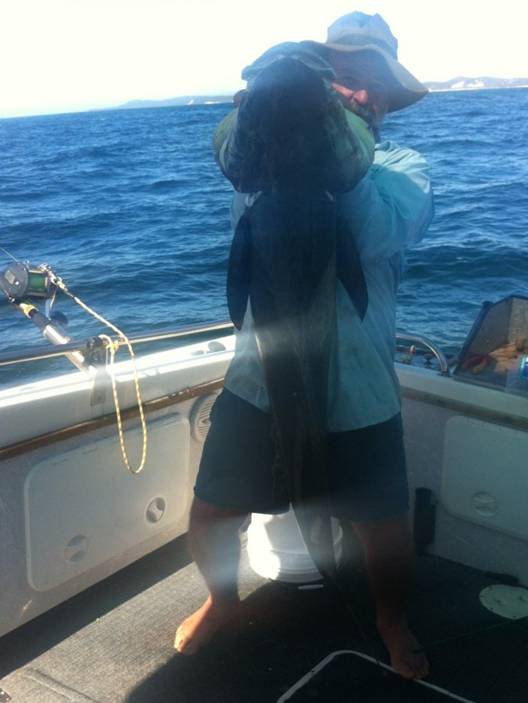 Cobia! Looks a bit like Master Co’s niece, Glen. Scott V writes in with a query about our Du-Bro release clips:

hey mate my mate brought these orange clips for the downrigger from u and im not 100% sure how to set it up the back has directions but you have to undo the clip then pull out about 10ft of line connected to the bait then attach the clip? when the fish grabs it how does the clip snap i know the circle clips that come with it might snap first but then wont the orange clip stay on your line and stop you from winding up? ty. im a downrigger noob and went off to long reef on Saturday with 5 livies to test them out

Attach the small end of the Du-bro spring clip to the mono loop shown on the left of the pic above. Then attach the plastic release to the large end of the clip: 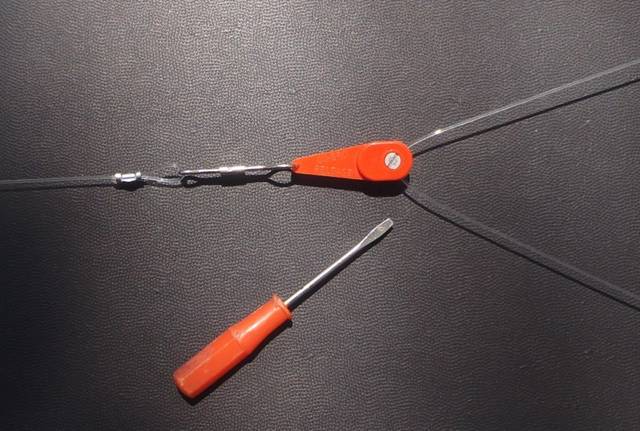 Use a small screwdriver or something similar to adjust the tension correctly for your leader size. Alternative method, (which I prefer, because it absorbs shock which otherwise would be transmitted down the braid to the live bait) is using a rubber band. Remove red release clip. Wrap size 18 rubber band around the braid, four times. Put the two loops into the clip and close. At the strike, the braid will cut – not break – the band:

Rob Brauman justifiably proud of his 129cm barramundi. Nice one: 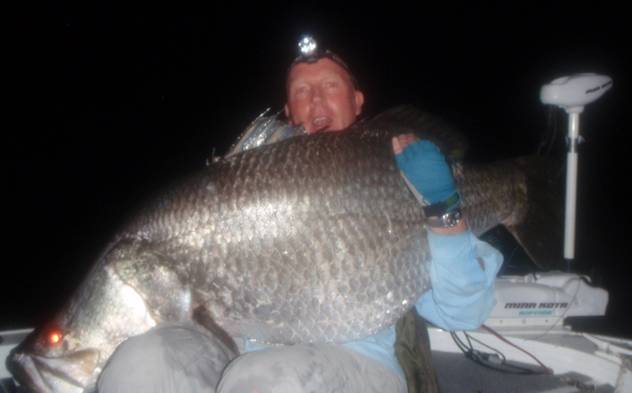 Hey Andrew, I am sending you a few pix's of a barra I caught 3 weeks ago, hope you like them. Cheers Rob

Mate that is a beast, and good on you for putting the big girl back over the side. Ross and Lew have been on the freshwater too: 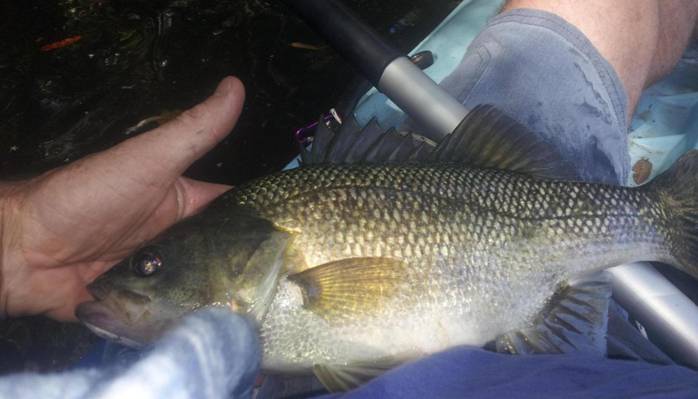 G`day again cobber. did an arvo session on the Wyong River today, am totally bitten by the bass bug! Ended up with 18 bass, this one was a stinker of a thing (maybe, I`m new to the game) but it was pretty big in Rossco’s book. Pulled the hooks on a lot too, lost a cracker, pulled the yack around on its run and broke the treble. tight lines, Rossco.

To politics, and the arrogance of the NSW government towards fishos knows no bounds. Media junkie and poster girl for the Dunning-Kruger Effect Bodgy Hodgy kicked off her NSW bag limit restrictions, this week:

One of the invitees writes to me:

Hey Andy, thought you may be interested in the way that DPI likes to hand out invitations to relevant stakeholders with 24 hrs notice so they have bugger all chance of attending. If given proper notice I would have been at this meeting with bells on, could only assume it’s going to favour commercial fishing more so than the rec sector hence the lousy notice. Let’s hope some commonsense prevails and they learn how to manage this very popular species before it’s too late!

Don’t hold your breath, champ. In the words of a great politician, this bunch couldn’t manage a whelk stall. Bodgy at Coogee on Thursday (thanks, Les) with local MP Bruce Notley-Smith, and John Burgess. Bag limit on mulloway cut by 60% (from 5 to 2) and minimum size increased by 60% from 45cm to 70cm. The first in a long list of bag limit cuts for NSW anglers: 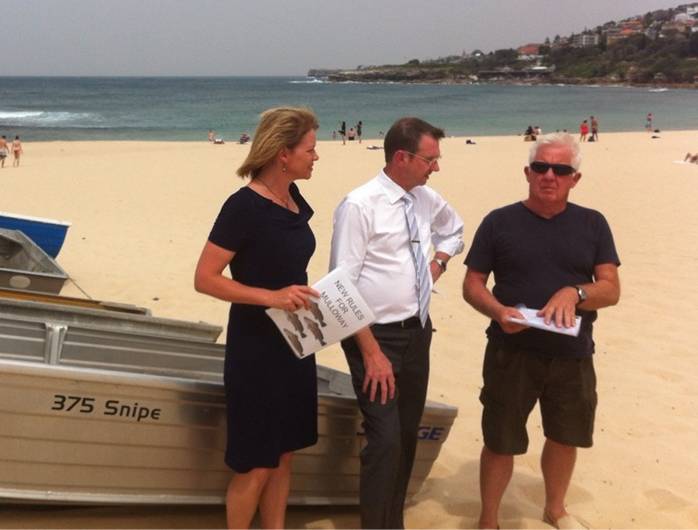 Bodgy’s co-incompetent Maritime Minister Duncan Gay wasn’t to be left out. For Gay, it's all about life jackets. Dangerous river bars, lousy launching ramps, boats unused for 20 years tied to public moorings aren't even on his radar. It's all life jackets, all the time. He’s about to make his move on mandatory life jackets for rockfishermen: 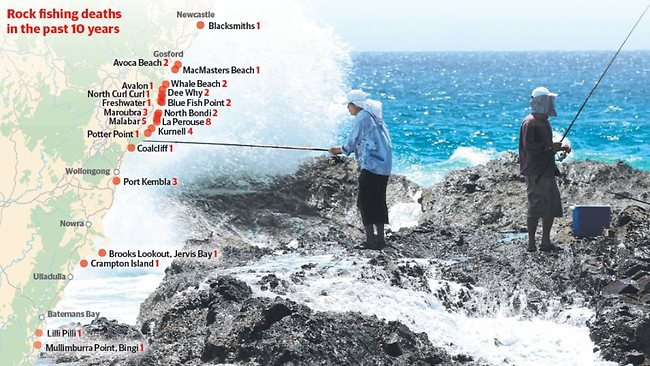 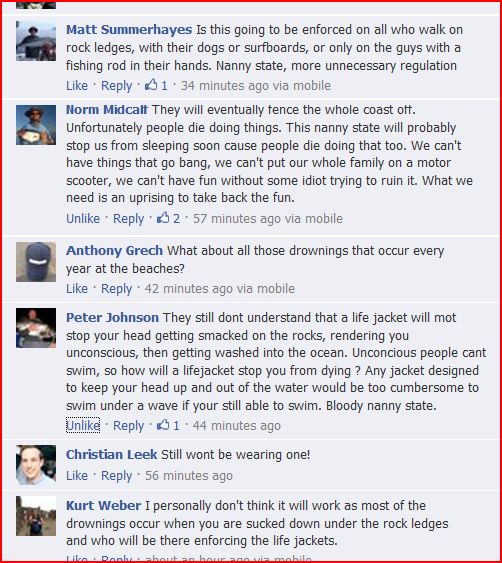 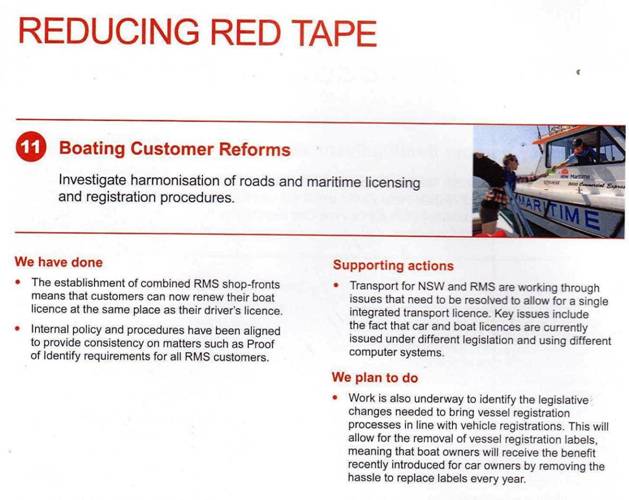 Uh huh. High five to Greg Maidment of Bronte, who sent this letter to the Daily Telegraph:

Well said, Greg. Thanks as always to our readers and especially contributors, so grateful for your pics and stories. Keep them coming because as soon as these crazy spring winds die down we’ll be back into the fish in a big way. Tight lines,